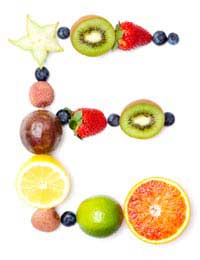 The causes of Alzheimer’s disease are not clear, but one cause may include a form of damage called by oxygen molecules, called ‘oxidation-induced damage’ or ‘oxidative stress’. The brain is especially vulnerable to this kind of damage, because it has a particularly high metabolic rate and so a high demand for oxygen.

What Is Vitamin E?

What Does The Science Say?

The study was carried out by a group of researchers in Rotterdam, in the Netherlands, and published in a journal called Archives of Neurology in July 2010.

The researchers followed over 5000 people who were 55 or older for an average of 9.6 years, and looked at four different antioxidants in their diets – vitamin E, vitamin C, beta-carotene and flavanoids. The people who ate the most vitamin E were 25% less likely to develop Alzheimer’s disease and dementia compared with the people who ate the least. This may be because the antioxidant activity of the vitamin E prevents or counteracts the oxidation-induced damage. The other antioxidants did not seem to have an effect.

Other studies have shown that diets rich in vitamin E, including Mediterranean-style diets involving olives, nuts, beans and vegetables, may reduce the risk of Alzheimer’s disease by 38-54%.

Foods rich in vitamin E include:Meat and dairy products contain moderate amounts of vitamin E. The daily recommendation is 4 mg per day for men and 3 mg per day for women. Because vitamin E is fat soluble, it can be stored in the body.

What Else Can Prevent Alzheimer’s Disease