Home > Fun & Quizzes > Q & A: Which Foods Prevent These Deficiencies?

Q & A: Which Foods Prevent These Deficiencies? 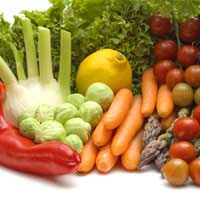 Lack of certain foods can cause deficiencies in vitamins, and these cause diseases. Vitamin deficiencies are most common in areas where people are malnourished because of famine, but some people on restricted diets do have to be careful about deficiencies.

Beriberi is caused by a lack of thiamine (vitamin B1). Symptoms include tiredness, weakness and weight loss, with an irregular heart rate and other heart problems. It is common in areas hit by famine.

Question 1: Which foods will prevent beriberi?

Answer: Beriberi will be prevented by eating plenty of foods rich in B vitamins, specifically vitamin B1. These include:

Pellagra is caused by a lack of niacin (vitamin B3), and is most common in areas where people rely on maize as a food source, as this is low in niacin. Symptoms are sometimes described as ‘the four Ds’ – diarrhoea, dermatitis, dementia and death. Other symptoms include:

Question 2:Which foods will prevent pellagra?

Answer: Pellagra will be prevented by eating plenty of foods rich in B vitamins, specifically vitamin B3. These include:

Scurvy is caused by a lack of vitamin C. Symptoms include pale skin with spots, bleeding, soft gums, and bleeding from other mucous membranes. Scurvy used to be common in sailors, because they didn’t eat much fresh food.

Question 3: Which foods will prevent scurvy?

Answer: Foods rich in vitamin C will prevent scurvy – these include fruit and vegetables, and liver. Rose hips, blackcurrants and red peppers are particularly high in vitamin C.

Rickets is caused by a lack of vitamin D, which helps the body use calcium to form strong teeth and bones. People with rickets will have soft bones which can become bent and break easily. Rickets is most common in people who don’t get enough sunlight, or who are malnourished.

Question 4: Which foods will prevent rickets?

Answer: Foods rich in vitamin D will prevent rickets. These include:

Regular exposure to the sun will also prevent rickets, as the skin makes its own vitamin D.

Lack of vitamin A is one of the causes of xerophthalmia. This makes the surface of the eye very dry, and can lead to blindness. It is most common in developing countries where the diet is limited.

Question 5: Which foods will prevent xerophthalmia?

Answer: Foods rich in vitamin A will prevent xerophthalmia caused by a deficiency. These include:

Megaloblastic anaemia is caused by a deficiency of vitamin B9 (folic acid) and/or vitamin B12 (cobalamin). This means that red blood cells do not form properly.

Question 6: Which foods will prevent megaloblastic anaemia, and who is most likely to have problems with a lack of vitamin B12?

Answer: Foods rich in vitamin B9 and B12 will prevent megaloblastic anaemia caused by this deficiency. These include:

It is particularly hard for vegans to get enough vitamin B12. Vegans can get some vitamin B complex from yeast and yeast extract and fortified foods or should take vegan-friendly supplements.

Question 7: Which foods will prevent a vitamin K deficiency?

Answer: Foods rich in vitamin K1 and vitamin K2 will prevent blood-clotting problems related to this deficiency. These include:

Vitamin K is also made by the friendly bacteria in the gut. Newborn babies don’t have these bacteria, so have an injection of vitamin K at birth.

Which Foods Provide These Vitamins?
Share Your Story, Join the Discussion or Seek Advice..
[Add a Comment]
This information above helped me a lot when I was struggling with my Ancillary health care assignment. Thanks????
Sfura - 23-Aug-16 @ 5:14 PM
Accurately &fastuseful advice Thank you! I now have knowledge
lesego - 5-Jul-16 @ 12:47 PM
marasmus resulting from incorrect feeding or malabsorption of nutrients
maxine - 3-May-16 @ 3:24 PM
Excellent! Awesome & useful advice! Thankyou! I wish I get more advice like this!
Queen - 18-Dec-15 @ 7:33 AM
Title:
(never shown)
Firstname:
(never shown)
Surname:
(never shown)
Email:
(never shown)
Nickname:
(shown)
Comment:
Validate: